Most of us may recall a time when we only had fixed lines in our houses to make phone calls. However, 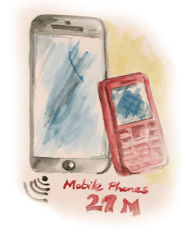 development of technology enabled the introduction of mobile phones to the local market, which was used by a handful of people back then. With time, mobile phones became more affordable and mainstream; and had the ability to browse the internet. Thereafter, Smartphones were introduced, and almost every single person holds one in their possession. We see that mobile phones, regardless of its make or model have become increasingly popular during the past few years. There are various reasons for this popularity and increase in usage which has an impact on all business activities.

Were you aware of the fact that there are 27 million mobile connections in Sri Lanka when the population is just 21 million? 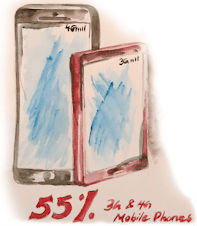 Believe it or not, this is the current situation and the number of mobile connections has increased by 5 million from January 2017 – January 2018. This provides clear evidence on how much the usage of mobile phones is growing in our community itself. Further, a majority of the mobile connections are 3G or 4G enabled, which indirectly means that most of these mobile phones have access to the internet.

The rise of mobile users in Sri Lanka plays a vital role in business activities as well. Businesses need to understand that people are more into mobile commerce and therefore, mobile marketing needs to be one of the important aspects that are looked into. Company websites need to be mobile friendly and accessible while they focus on developing mobile apps, social media posts, mobile ads are also developed.

Out of the 27 million mobile connections, 5.5 million are active social users.

We saw an increase of 1 million social users over the past 12 months. This too provides insights on what businesses need to focus in terms of their marketing and assess whether their marketing tactics have the ability to deliver results. If 29% of the web traffic is caused by mobile users and if 90% of the Facebook traffic is from mobiles, businesses need to focus on going mobile friendly if they already haven’t.

This website uses cookies to improve your experience while you navigate through the website. Out of these, the cookies that are categorized as necessary are stored on your browser as they are essential for the working of basic functionalities of the website. We also use third-party cookies that help us analyze and understand how you use this website. These cookies will be stored in your browser only with your consent. You also have the option to opt-out of these cookies. But opting out of some of these cookies may affect your browsing experience.
Necessary Always Enabled
Necessary cookies are absolutely essential for the website to function properly. These cookies ensure basic functionalities and security features of the website, anonymously.
Functional
Functional cookies help to perform certain functionalities like sharing the content of the website on social media platforms, collect feedbacks, and other third-party features.
Performance
Performance cookies are used to understand and analyze the key performance indexes of the website which helps in delivering a better user experience for the visitors.
Analytics
Analytical cookies are used to understand how visitors interact with the website. These cookies help provide information on metrics the number of visitors, bounce rate, traffic source, etc.
Advertisement
Advertisement cookies are used to provide visitors with relevant ads and marketing campaigns. These cookies track visitors across websites and collect information to provide customized ads.
Others
Other uncategorized cookies are those that are being analyzed and have not been classified into a category as yet.
testing
SAVE & ACCEPT
Powered by